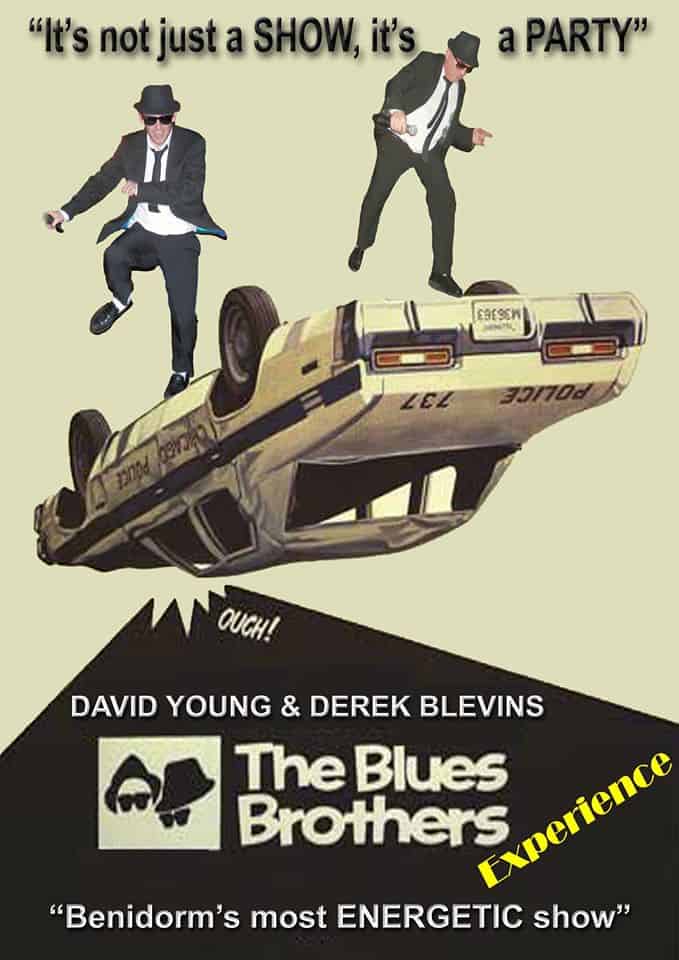 The Blues Brothers Experience – Benidorm, are fast becoming Benidorm’s most popular act. Indeed they are accumulating a fan base throughout the Costa Blanca and beyond, with a guaranteed full house at every show outside of the town and having already reached the point where they have declined work as far away as Madrid, France and the UK due to the commitments already in the diary. Derek Blevins (56) (who performs solo as Dickie Ray), and David Young (29) only met in December 2013. Both had been performing solo shows around Benidorm for a few years.

The Blues Brothers have possibly inspired the most tribute acts throughout the world with the exceptions of Elvis and Abba. It could be very easy to believe “if you´ve seen one you´ve seen them all”. Think again! This one is different…very different. The show is loved by all ages from very young kids to grandparents.

All the rules governing a traditional Blues Brothers tribute have been thrown out. Derek told us “I felt that The Blues Brothers shows throughout the world have all become very similar. Most tribute shows are based around years of hits recorded by top artists. The Blues Brothers on the other hand is based around just two movies. For that reason all the others seem to be singing the same songs and performing the same comedy routines. It´s like watching the same play, just performed by a different cast. I felt it needed something new. My idea was to capture the essence of the much loved characters Jake and Elwood Blues and apply their “couldn’t care less” attitude to create a completely new show. Yes, the old favourites such as Rawhide and Everybody Needs Somebody are still there, but there are always surprises, sometimes for us as well, as the audience are encouraged to be part of the show. Not just watch it. “It´s not a show, it´s a party.”

Derek from Northern Ireland had been performing as a solo artist with a massive repertoire of songs covering almost every genre, having spent almost his entire life in music. Starting at the age of 3 he has performed in bands throughout Ireland after joining his first band at the age of just 14. David, a self taught dancer from Scotland, had been performing throughout the summer in Benidorm as Michael Jackson and taking his show back to Scotland for the winter season. Tracy from Essex is the third member of the team. Working tirelessly in the background not only managing and promoting the show, but also on occasions makes an appearance on stage in the role of Sister Mary. Fans of the movie will remember it was Sister Mary who initially sent the Blues Brothers on their “Mission from God”. Tracy can also be found at most shows taking candid photos of the audience as they join in with the show. A nice surprise for the audience when they learn their enjoyable evening has been captured on camera and the photographs are available and always free of charge.

The show originated almost by accident. Derek teamed up with a friend in Benidorm to play the part of Jake Blues in an existing Blues Brothers show, initially standing in to cover a period of illness for the artist who normally played the part. It soon became obvious that the role was going to be more permanent, however things changed when “Elwood” decided to move to Belgium. Derek was left with a show, which still had work in the diary and no Elwood. Derek, however, saw this as an opportunity to bring his own ideas into the show. He decided Elwood should be replaced by a professional dancer and contacted David in Scotland. Derek and David had never actually met, but Derek had admired his dancing abilities, having seen him perform in Benidorm throughout the previous summer seasons. David loved the idea of trying something new and immediately flew back to Benidorm. From that point the two instantly gelled. David arrived in Benidorm on 23rd December and they performed their first show on 24th December, without a rehearsal. A member of the audience commented on that first night “it was a very polished show”. Something the guys still smile about today. Since then rehearsals have never been part of the daily work routine. “The show is built around the audience and we can’t rehearse it when they´re not there”. So next time you see a sign for a Blue Brothers tribute show, look again. If it says The Blues Brothers Experience – Benidorm. Then, no, you haven’t seen it before. This is the one they are all talking about.

You can catch the fun in Benidorm at Rock and Roll House, Heartbreak Hotel, The Med Playa Hotels, Sinatras, Ambassador Hotel and Jail Rock.