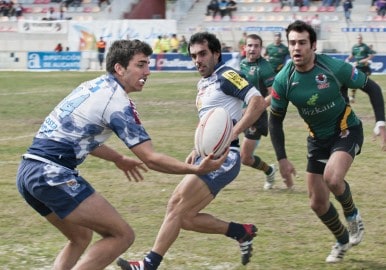 Latest news at the top – please read down.

This past Saturday 29th November , our first team travelled to Zaragoza to play againts Fenix RC. We won a hard fought battle in what can only be described as atrocious conditions! 7-0, the final score. The pitch was full of water & mud! And our boys are not used to these conditions, but they stuck it out and came away with an away win and 4 more points on the board, which keeps us in second place on the table.

We had a first win of the season for our Under 18’s! They played away against Elche Rugby Club. They won 38-5

Next Sunday 7th December we have a very important game for our first team. We play against local rivals Les Abelles from Valencia at 12.30. We need the victory to keep on the top of the table and to return them some good karma!

There will be an Argentinian Barbecue organised for the after match lunch. Roast Veal rolls with Creole Sauce for only 4 euros. Try one and you will be back for more!

No rugby games for the first and second team past weekend.22/23 October

Past Saturday morning the Under 16 team played at home versus Tatami Valencia. They lost 34-17, Under 18 played also against Akra Alicante, 25-15 for Alicante

Th club has start a new promotion for Under 12, under 10. Saturday morning from 11 to 12.30 Tag rugby (not tackle). First Saturday was a success. 50 boys and girls enjoyed the session

The first team will travel on Saturday to Zaragoza to play Fenix Rugby Club. Strong opposition for Rugby La Vila

The under 18 will travel to Elche to play Elche RC at 12.00 on Saturday

Be ready for next first team rugby game at home. Sunday 7th December at 12.30 against old rivals Les Abelles Valencia. Don’t miss out. Ticket will be 5 euros. Artisan Paella will be organised for the after match, 5 euros per person. It is going to be a big day

No rugby games for the first team past weekend. The players deserved a break. 15th October

But second team had a game versus new team from Villena. They won 165-0. Obviously Villena need to learn a lot, but their attitude was very sporting until the end of the game

The womens team also played last Saturday versus Cau Valencia, we lost 32-14, our womens teams is improving every week. First win is near

Our Under 16 team played versus Cau Valencia. Good performance against strongest team on the competition but we lost 38-18

More than 150 boys and girls, form under 6 to under 12 years of age were playing rugby past Saturday morning at our club. Plenty of rugby for everybody. We offer them after the games a huge paella. Everybody enjoyed the day

Next first team rugby game will be Sunday 7th December at 12.30 against old rivals Les Abelles Valencia. Don’t miss out. Tickets will be 5 euros. Artisan Paella will be organised for the after match, 5 euros per person

Next Sunday 2nd November at 12.30, a crucial game for Rugby La Vila, we will play against San Cugat Barcelona.

If you remember last season, they beat us at last minute, last game of the season. We did not qualified for play offs to play Spanish top league, for only one point

Well, than means next Sunday we have to beat them, if we want to qualify for next play offs

We guarantee game at high voltage.

We need your support to win this game. Tickets as usual are 5 euros per person and Under 12 get in for free.

Last week results. Our women’s side lost 44-0 at home on Sunday against strong Valencian Ladies

Under 16 lost against Denia, away, last Saturday morning

But more important activity last week, was the first Mini Rugby meeting, Saturday morning at Villajoyosa Rugby Club. More than 150 boys and girls playing all morning. The future of Alicante Rugby was there. fantastic day

There is still time to join the club as a member, as a player, or as a supporter, we need all the help we can get, so come down and watch our next game and join in!

From initial kick off, the players were on the game, three tries first half. Tries for Noel Carrion, Henry Davies, Hernan Quirelli and Duncan Tout.

Conversion for Juanma Quirante who was outstanding

The only try for Valencia was for Rodrigo Rosso.

Our women team played away against Elche. Good core for the first game. 43-7, brave our girls

The next home game will be in two weeks time, Sunday 2th November at 12.30 at Villajoyosa Stadium. We will play against San Cugat Barcelona. Ticket will be 5 euros for adult. Under 12 free

Next Saturday 25th October from 10 am to 2 pm mini Rugby Festival at our Club. Bring your children, they will be happy to play some rugby, most of the players are new

The second team and under 18 and under 16 will also start`to play next saturday. Time TBC

We also have a well equipped Gym. members have free use. Come and join Rugby La Vila

It was not an easy win, Barcelona players were superb. Many mistakes from La Vila players. Our kicker Juanma Quirante had the day and he converted 3 from 3 penalty kicks. Duncan Tout, the only English player this season, score the only try for La Vila

Despite La Vila did not play very well. The win is important to keep top at the table. Now the coach Hernan Quirelly has time enough to prepare next Sunday game at home versus Sitges from Barcelona. Sunday 28th September at 12.00 Don’t miss out. Tickets as usual 5 euros, under 18 year free

First touring side will be Waethley Hills, we will play them Sunday 5th October, at 12.30, Free entrance

The second team will start to play Saturday 18th October. Still time to join the club, train and play for second team. They play locally at Alicante level, not long journeys, only local, Denia, Alicante, Elche, Torrevieja. New Players are welcome. Ficha will be 200 euros per season, including insurance and travel expenses

We also have a well equipped Gym. members have free use. Come and join Rugby La Vila

To become a member of La Vila Rugby Club, or for more information about membership, send your details to oficina@rugbylavila.net. For membership requests please remember to include your FULL NAME, ADDRESS, CITY, POST CODE, MOBILE NUMBER and E-MAIL

We are striving to offer the best service possible for fans of La Vila Rugby Club.