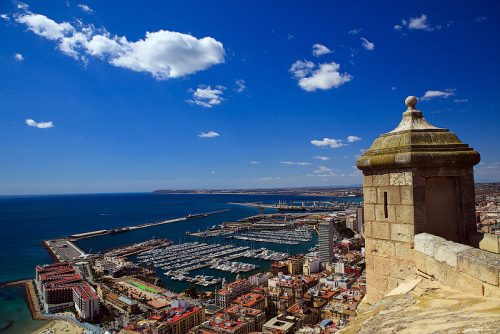 The historical port region of Alicante, has been inhabited by people for thousands of
years, and has seen the likes of the Romans, Visigoths, and Moorish invaders who have all left their mark on the city. Taking a pay-what-you-want tour​ with GuruWalk in Alicante is one of the best options to discover all about the city.

GuruWalk is an online community that offers free walking tours in more than 200 cities worldwide. The platform was created in Spain and allows travelers to book a tour wherever they go. It also allows people to become guides in their own city. The booking is completely free and the tours don’t have a fixed price. Travelers can give whatever they want at the end of the visit, according to their budget and the experience they had. The average tip ranges between 8€ and 12€, but the amount that you wish to leave is entirely up to you! ​Some people leave 5€ while some others leave 50€.

This type of tours represent a great alternative to traditional tours. Indeed, the so
called guruwalks, offer an unique approach to visiting a city​, mixing culture and
entertainment. The guides, also called gurus, show their own perspective of the city
letting you know about hidden gems, legends, traditions and many more.

Gurus are locals who are passionate about their city and usually with a deep knowledge of a particular subject: history, art, gastronomy, architecture, culture etc. They are always excited to meet people from all over the world and eager to share with them their knowledge.

In Alicante, you can meet guru Maria and explore the hidden history of the city as she
uncovers the myths, legends, and secrets​ of Alicante’s turbulent past. But don’t worry,
Maria won’t just cover the past! Alicante is nowadays a bustling city with many cultural
and gastronomic activities. Maria will keep you updated with everything going on in Alicante and will suggest to you the best places to eat, drink and dance the night away.

If you have the chance to drop by Elche while in Alicante, don’t miss this tiny city with two UNESCO World Heritage sites​. Guru Raquel is in Elche waiting for you, and ready to let you know why the city has these two World Heritage Sites with her guruwalk. She will
also take you to Elche’s must sees: the municipal park, the Royal windmill and its variety of palm trees, the basilica of Santa Maria, the Altamira palace (now a museum), and the Calahorra tower, as well as the multiple places where the people of Elche spend their leisure time.